We did an experiment (same experiment with the previous post): we sent out 12 identical campaigns at a ~2-hour interval in one day. Each campaign was sent to 1200 emails. All 14400 emails are from the same country and they are randomized put into the 12 campaigns.

The sending time is in EST – Eastern Standard Time. The recipients are in EST, CST, MST, and PST.

In the following figure, we plot the percentage of openings as a function of the hours after sending time. It is a complicated figure so let me explain. Take the middle red curve for example. If we send our emails ~16:00, then we expect that 45% of opens will occur in the 1st hour (16:00-17:00), then 13% will open in the 2nd hour, and 6% will be in the 3rd hour.

If we send our emails in 2am in the morning (very early), we can see that the peak time for opening will be 4-6 hours later. This is of course not surprising since people are sleeping. 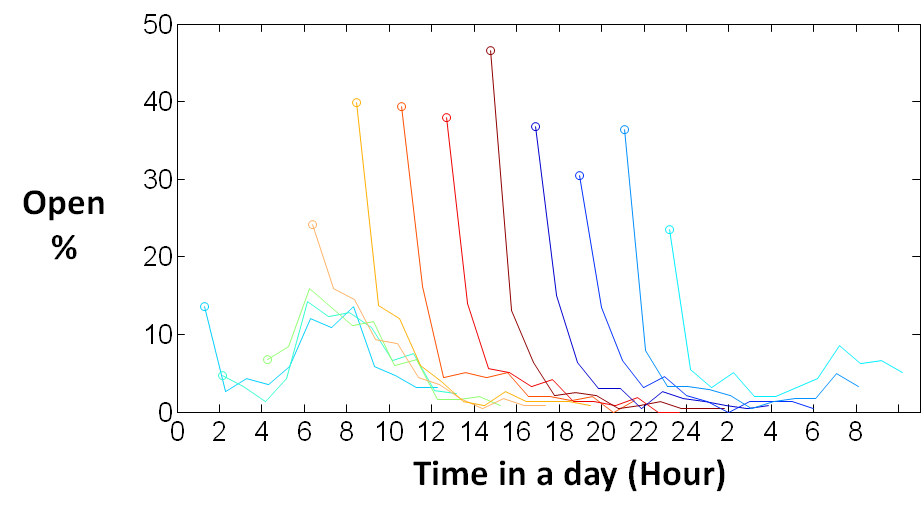 Based on the above figure, we can see that if we send out the email in the day, the first hour is the most important period: ~40% opens are within the 1st hour. However, we should also emphasize that it is wrong to say that “most opens occur in the 1st hour” since >60% opens occur after the 1st hour.